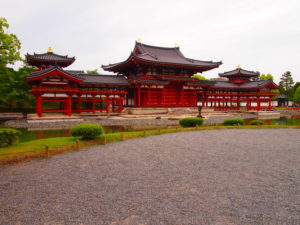 During my twelve incredible days exploring the Asian island nation of Japan in January of 2019, I absolutely fell in love with the country. The people, the culture, the gorgeous sites, and of course, the phenomenal food, captured my heart. It’s near the top of my list of my favorite destinations of all-time and I believe it’s a place everyone needs to experience at least once in their lifetime. Join me on my latest Japanese adventure!

After arriving in Kyoto on the morning of my fourth day in Japan, I met up with my new friend and guide Kosuke, who took me on an incredible tour of Kyoto’s temples and an insanely delicious traditional Japanese street food tour at the Fushimi Inari Shrine! Come along with me as I begin my exploration of Kyoto and gorge on some of its best street food!

Kyoto is an ancient city that is steeped in history and tradition (it served as Japan’s capital for over 1,000 years from the 8th century to the 20th century), and that history and tradition can be seen at every turn. The moment I arrived, I was immediately blown away by how different Kyoto felt from the ultra-modern concrete jungle of Tokyo. Kyoto felt much quieter and much more traditional by comparison. There are roughly 2,000 temples in the city!

My tour began at Kōmyō-in, a sub-temple in the Tōfuku-ji Buddhist temple complex that was founded in 1391. The temple is famous for its Zen garden, maple trees, and cherry blossoms. It’s customary to take off your shoes when you enter any Japanese temple or apartment, so we did so and continued on to the Zen garden, which is covered in moss; contains lots of white gravel (which is raked weekly by the head monk); and has lots of large rocks jutting up from the moss. The rocks represent mountains and the white gravel symbolizes the ocean. You can’t step into the garden; you have to enjoy it from the wooden walkways of the temple.

Inside the temple are several rooms and photos of the temple hanging on the walls. Kosuke also took me to the praying hall, where the head monk reads from the Buddhist bible. The hall contains a statue of the Buddha and is beautiful!

Next, we headed off to get some breakfast at the food market near the Fushimi Inari Shrine, which is a very famous shrine that sees 7,000 visitors per day, including locals who pray for the prosperity of their businesses.

The aroma of the food in the market was amazing! I couldn’t wait to try it!

I started with takoyaki (500 Yen/$4.46), or octopus balls, which are made from a batter containing octopus, red ginger, and cabbage. It was hot, but so delicious with a soft, crème brûlée-like consistency inside, and had a nice takoyaki sauce and bonito flakes on top.

Next was a tofu steak (400 Yen/$3.57), which is tofu on a stick that’s pan-fried and is topped with wasabi, ponzu sauce, seaweed, and bonito flakes. I loved it, especially the texture of the bonito flakes and the flavor of the seaweed! So delicious!

We followed that with gyoza (300 Yen/$2.68 for 3 gyozas), or a type of Japanese potsticker, which was wrapped with chicken skin. It was the best gyoza I’ve ever had! The chicken skin was really fatty and changed the texture of the gyoza. It blew my mind! I followed that with a dried, fig-like fruit that was amazing as well.

As we continued through the market, I bought two Japanese masks (2,000 Yen each/$17.86 each) for my wall at home. We made our way toward the Fushimi Inari Shrine, and Kosuke told me that it became popular after the film “Memoirs of a Geisha” was filmed there.

The shrine’s most popular site is the 10,000 vermilion torii gates that straddle a network of trails going up the mountain. Each gate was donated by a Japanese businessman and is inscribed with the name of the businessman’s company and the date it was donated. The gates are gorgeous!

Next, I visited some miniature torii gates stacked in front of the holy rock, and picked up the good luck rock to see what kind of luck I would have! Let’s just say I hope it was wrong!

I hope you enjoyed my temple, shrine, and food tour of Kyoto! If you did, please give it a thumbs up, leave me a comment below, and subscribe to my channel for more awesome travel and food content!

Book a private tour of Kyoto, Osaka, Nara, or Kobe with Kosuke: https://triplelights.com/profile/13420

* This article was originally published here